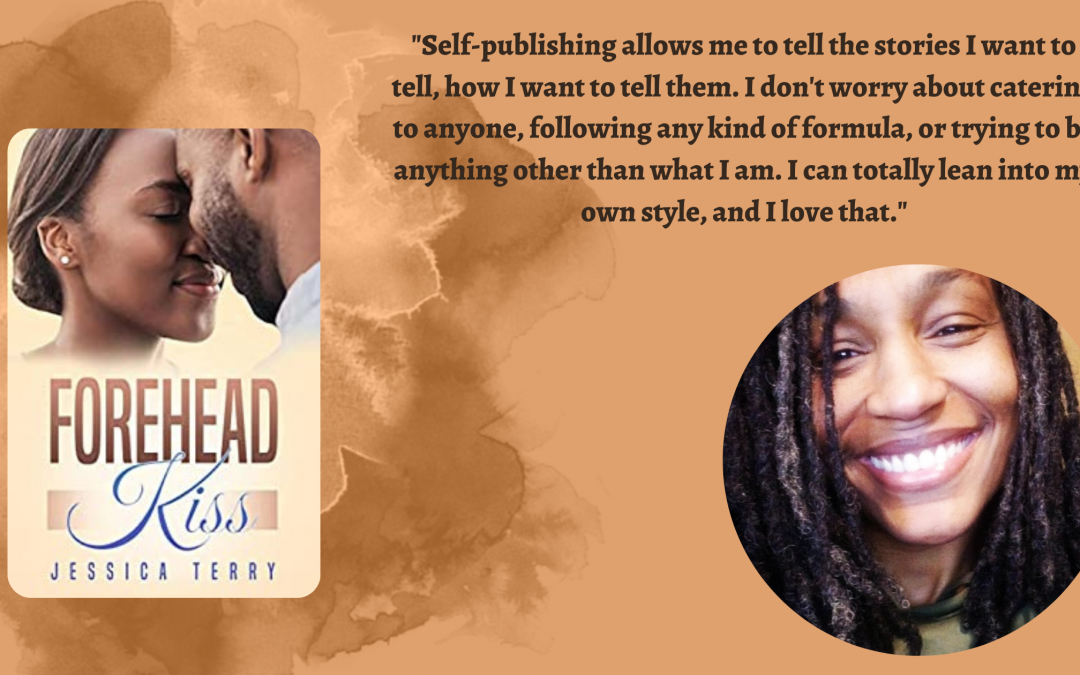 To Jessica, putting out a new book is twice as exciting as someone saying they brought her food. Writing was her first love (cliché alert) and she loves it as much now as she did when she was a child spending hours and hours holed up in her room creating. This Georgia peach has many interests, having majored in Sport Management at Georgia Southern and gotten certified in Neuromuscular Therapy from Rising Spirit Institute of Natural Health, but writing is always in the top spot. In addition to her novels, Jessica is also a copywriter and a ghostwriter and would love to expand into teleplays and screenwriting. Jessica still lives in Georgia with her son, Langston.

Jessica Terry, like many of us authors out here, has always written but didn’t think that she could earn a living being a writer and so she treated her hobby like a hobby instead of her profession. Until a few years ago. Now she has 19 books under her belt and another in the works. She’s sharing one of her novels with us today. Let’s get right to it.

1.) Tell us a little about yourself.
I’m a big ol’ introvert; I hardly go out. Most might consider me a little boring. lol I’m getting ready to be an empty nester once my son goes off to school in September (not ready for that) and really all I do is work out, write, read, and watch sports, HGTV, and old sitcoms. And eat; love to eat. 🙂

2.)Tell us what Forehead Kiss is about.
Forehead Kiss is about Nyla Nelson, a clumsy fellow HGTV lover, who meets Cam when he comes to her rescue on the street one day and immediately falls for him, and all of her close calls when she tries to let him know that (or just straight chickening out). Things get more complicated when Cam begins dating Nyla’s roommate, Jada. Nyla is one of those people that wishes for stuff but gets gun-shy when she has the chance to actually get it. (Fun fact; Dorian and Chrisette Clarke from When You Share Too Much have a cameo in there, which was fun to do. Hadn’t done cameos before).

3.) What inspired you to write this book?
You know what, there are sooo many heavy, serious, or darker books out right now, and that’s all good; no diss. But the first half of this year kicked my butt, and I wasn’t trying to read or write anything like that. I needed to do something to cheer myself up from everything going on in my own life, let alone everything happening in the world right now. Forehead Kiss is a romcom because I wanted to do something light and funny. Those are my favorite to write. Nyla and Cam’s meet-cute popped into my head one day and then the story just took on a life of its own. There’s some semi-intense scenes (and some lovin’) in there, but the overall mood is something that’s aimed to make you chuckle. Be it at Nyla, Cam, or Nyla’s BFF Kori; they all have their moments. lol

4.) Name one thing that you love and one thing that annoys you about both Cam and Nyla.
I love how much Cam loved Nyla, and how protective he was of her, even if he went overboard with it at times. What annoyed me about him was that he was kind of on some double standard stuff as far as how he tripped whenever Nyla showed interest in another man, yet he flirted with other women (namely her roommate) right in her face.
As far as Nyla, I love how cool she was to people; she had people’s backs, kept their secrets, all that. But she annoyed the stuffing out of me with how she kept making things harder than they needed to be, and being so paranoid.

5.) What was one of the challenges you faced while writing this book and how did you overcome it?
I can’t really say I had any challenges with this one; it was a pretty smooth one for me, thankfully. If anything, it was making Cam to where he didn’t come off as a bad guy or a jerk because of some of the stuff he was doing. I feel I overcame it but I guess that’s subjective to the reader.

6.) How many books have you written?
Written? Ooh…I don’t even know. I’ve been writing books since I was a youngin’ (yes, I really do use that word) but my first serious-serious novel – as in, I was thinking about publishing it – was written in college. That one was never released, but I published my first, Some Like ’em Thick, in 2008. I’ve since published 18 others, with my next, All Because of Ava, coming out later this year.

7.) When did you know that you wanted to be a writer?
Writing is the only thing I’ve ever really wanted to do. I’ve loved it for as long as I can remember, but unfortunately, I didn’t seriously dive into it as early as I should have. If I had one thing to do over, that would be it. I tried other things like going to Cosmetology school, college, Massage Therapy school, getting ‘regular’ jobs…I guess because I didn’t believe I could really make a living just writing. It was always a love, but up until a few years ago, I treated it as more of a hobby than a potential profession.

8.) You’re not only a novelist, but you provide ghostwriting and copywriting as well. Share a little bit about those talents with us.
Ghostwriting just kind of fell into my lap. Several years ago, a family friend hit me up out of the blue and asked if I’d be interested in writing a book for a local radio personality, and that was my first project. My latest was one I penned for a music producer. Again, that opportunity just appeared out of nowhere, as he contacted me on Instagram. I enjoy ghostwriting; it’s a fun challenge.

Copywriting came about when I saw an advertisement one day for American Writer’s & Artists, Inc (or AWAI) and was intrigued, as I’d never heard of copywriting, even though it was all around me. I’d even done it in an unofficial capacity at my job, though I didn’t realize it at the time. I began studying it and fell in love with it; I do freelance work when I’m asked and would love to do more.

9.) Why did you choose to go the route of self-publishing?
I tried the traditional way with that book I wrote in college. At the time, I’m not even sure if I knew self-publishing was a thing. This was probably around 2003 or 2004 when I was doing this. I was offered a deal by some publisher (can’t remember which) but when they sent me the contract, I thought the terms were trash. The family friend that referred me for my first ghostwriting deal is an attorney, and when I showed him the contract, he agreed with me. So I passed and just let it go for a few years, though I was still writing stuff. In 2008, he said he could help me self-publish, and I had already written Some Like ’em Thick by then. After that, it was on. I love it.

10.) What do you feel is the connection between self-publishing and preserving the authenticity and voice of the stories you tell?
Self-publishing allows me to tell the stories I want to tell, how I want to tell them. I don’t worry about catering to anyone, following any kind of formula, or trying to be anything other than what I am. I can totally lean into my own style, and I love that.
I got a taste of what it’s like to have someone have a hand in what I put out and (try to) make changes; I had an agent for a little while when I initially released She is Me in 2016, and she published it through her company. She kept wanting to change certain things about my story, as far as the dialogue and some of the vernacular, and even put a white woman on my cover even though there’s not one white character in the book. I had to fight with her to darken the picture so the lady at least appeared to be of color. Unfortunately, those weren’t the only issues with her. I clearly had the wrong agent and hurried up and severed our relationship. Last year, I re-released She is Me with a new cover.

11.) What book projects do you have in the works right now?
I have a few things going on in different stages; the main one I’m writing now has eight main characters (four couples), which is the most I’ve ever done in a story. It’s about the drama that ensues when a bunch of secrets are revealed during a couple’s game night. I’m also working on a second chance romance, a contemporary novel involving a set of female triplets and their brother and all of their relationship antics, and a story centering on E.J. and Natalia from Split By the Bell and The Karma Call.

12.) Where can readers buy your books?
Pretty much all of my books are on Amazon, among some other places. One day I’ll get to where I sell them straight from my site, even though you can link to them from there now.

14.) Please share your website(s) with our readers.
My main website is www.jessicaterry.com. I also have a copywriting site at www.copyjessicaterry.com and merch site at jessicaterry08.myshopify.com.