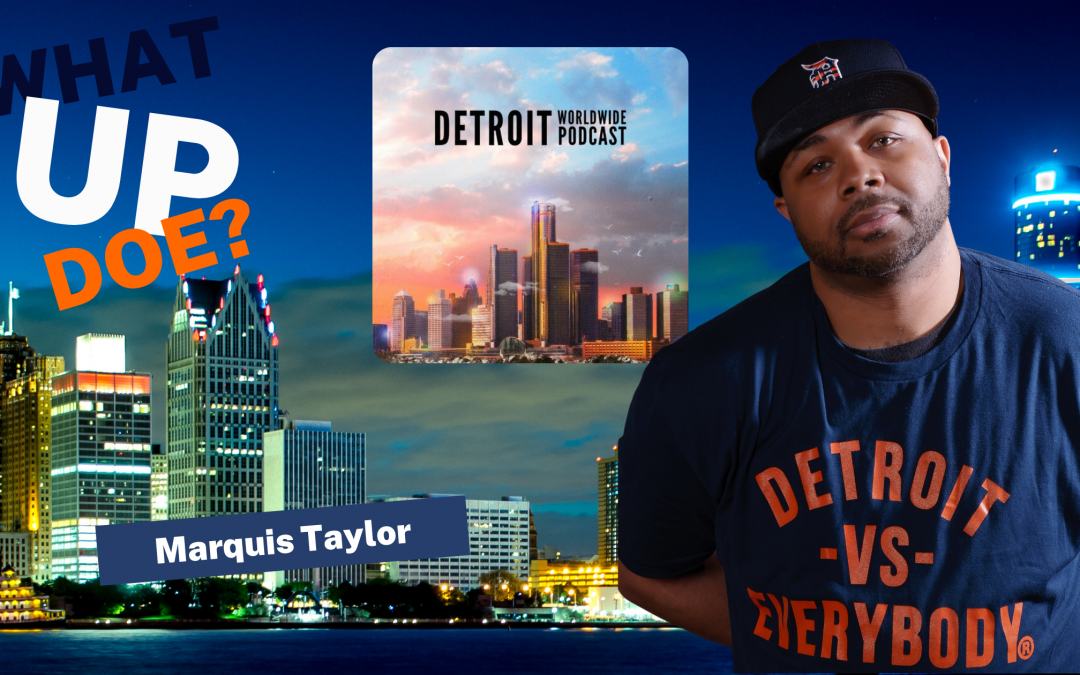 Marquis Taylor is an educator, writer, content creator, and podcast host. He is the creator and host of the Detroit Worldwide Podcast, an interview-driven podcast and platform that was created to showcase and amplify the stories of native Detroiters from across the world. Since its official launch in 2019, Detroit Worldwide has amassed more than 10,000 downloads and was recently named as one of the top 20 Black Podcasts to check out in 2022 by Blavity.

“I am a storyteller at heart and strongly believe in the power of Black storytelling.”

Some people just exude excellence in everything they do and Marquis Taylor is among that population. A native Detroiter, he’s letting the world know how brothas and sistahs from the “D” are movers and shakers all over the world.

Let’s get right to it.

My name is Marquis Taylor, and I am the host of the Detroit Worldwide Podcast. I am also a writer and educator. I was born, bred, and raised in Detroit, Michigan, and began writing back in 2002 during my senior year of high school.

At the time, I aspired to become a music journalist where I would lend my talents to The Source, Vibe, and XXL Magazine, which were all publications that I read growing up as a teenager. With these career aspirations, I spent my time writing for my high school’s newspaper and reviewing the latest albums by Jay-Z, Nas, Eminem, and Redman, who were some of my favorite emcees at the time. I was also able to contribute to the Michigan Chronicle as a high school student, which only amplified my love for writing.

What’s special about the Michigan Chronicle is that it’s one of the oldest Black-owned newspapers and publications in the US. Writing for the paper at the time as a native Detroiter made it even more special. My journalist aspirations would take me to Wayne State University where I completed my Bachelor of Arts degree in English and later Eastern Michigan University where I completed my graduate degree in higher education. I’ve had the pleasure of working at the University of Michigan, the University of Minnesota, and now Michigan State University. Still, writing is my first love, and it warms my heart that I can contribute to publications like the Minnesota Spokesman-Recorder and Rolling Out Magazine from time to time whenever a story or person moves me.

2.) Tell us what inspired you to create the Detroit Worldwide podcast.

Moving away from Detroit 12 years ago and the state of Michigan 8 years ago, made me realize how special both places are, specifically Detroit. When I lived in Minnesota, I’d often rock my Detroit Tigers hat with the Old English D or a Detroit Pistons jersey. People would usually ask me if I was from Detroit and when I would reply with the affirmative, I’d often get snide and negative remarks about the city. The same would apply whenever I traveled to places across the country.

That said, I wanted to create a space where Detroiters could tell their stories and, most importantly, talk about how special the city was to their upbringing and success. I am a storyteller at heart and strongly believe in the power of Black storytelling. I also wanted Detroiters to have an accessible way to connect. So, if you’re a Detroiter living in Houston, Atlanta, LA, or Chicago, you can connect with other Detroiters and support the work they’re doing whether it’s a business or initiative. Detroiters stick together and support one another. That’s what makes us special.

3.) What is the mission of Detroit Worldwide?

The mission of Detroit Worldwide is to simply tell the stories of Black Detroiters while also highlighting their businesses, causes, projects, initiatives, etc. It’s more than a podcast, it’s about amplifying our Blackness and its excellence. It’s also about community and making sure we were connected and supporting one another. I’m all about collectivism and believe there is strength in numbers.

4.) You begin every episode with the question “What up, doe?” and I feel like it’s more than just a casual greeting. Can you elaborate on that little more?

“What up, doe” or “Whaddupdoe” is the official greeting of Detroit. For as long as I can remember we greeted each other in the streets like this, and although I am unsure of its origins, I can tell you it’s been around longer than me (I was born in ’84). In fact, I recently discovered that Prince used the greeting in the liner notes of “Purple Rain” when he shouted out his concert promoter, Billy Sparks, who is also from Detroit and in the movie as well. As I have gotten older and have traveled the country more, I hear people greet each other the same way even if they do not have a connection to Detroit. Detroit’s fashion, lingo, and music have literally impacted the world, so it’s only right that I start each episode with “What up, doe?”.

5.) You recently finished a series called Men of Morehouse. Tell us more about it and why you chose to do it.

The Men of Morehouse series literally came out of nowhere! In December 2021, I recorded an episode with Antoine Griggs, who is a musician and entrepreneur out of Houston, TX. I came across his story online and decided to reach out to him for an interview. As I was interviewing him, I began to learn more about Morehouse College and what it meant to be a “Morehouse Man”.

From there, we came up with the idea of spotlighting more Morehouse grads during Black History Month. He then connected me to Dr. R. Wayne Woodson, who is the great-grandnephew of acclaimed scholar and historian, Dr. Carter G. Woodson. From there, I connected with Rashad Dudley and Andre Johnson, who are based out of Memphis, TN, and Detroit, MI, respectively. Like all of my podcast interviews, I wanted variation, and a collection of stories, and those gentlemen were more than willing to provide them.

6.) Other than being from Detroit, what criteria do you use to select your guests and how do you find them?

Well, for starters all of my guests must have some type of love and appreciation for Detroit because not everybody who is from the D loves the D, unfortunately. They also have to be from Detroit. Aside from that, I look for people who have great stories to tell, whether it be a story of success or perseverance. I want our listeners to either learn from the episodes or to become inspired by them. A wise man never reveals all his secrets, but more often than not guests for Detroit Worldwide come by way of referral. Those referrals can be from previous guests or from fans of the podcast. I also come across interesting stories online and make connections from there. But again, a wise man never reveals all of his secrets (wink, wink).

7.) Your website has a Black Business Directory. Tell us more about it and why you feel it’s important.

The Black Business Directory is a section on the website that’s devoted to the many entrepreneurs I’ve interviewed on the podcast. I wanted to create space on the website where I could promote their businesses and organizations. Venus Austin, who is the founder of Blank Wardrobe, which is an online fashion boutique for women was the first entrepreneur I interviewed.

Her story inspired me to seek out more entrepreneurs and from there we were able to find others that were willing to share their stories. Like our HBCU grads, I love interviewing entrepreneurs, especially those that have goods, services, and products we can support. I have a global audience, so I want people to be able to support their businesses regardless of their location. Black businesses are super important to me as I am all about recycling the Black dollar and its currency.

8.) You recently received the trademark for Detroit Worldwide. Share a little about that journey with us.

I come from a family of entrepreneurs, so ownership is very important to me. I decided to trademark the name “Detroit Worldwide” simply because I have invested blood, sweat, tears, time, energy, and money into this platform. I was able to connect with an attorney out of Flint, Michigan, who helped me with the process and a year later we were awarded the trademark. I could not have done this work without their support. In fact, it’s only right that I shout out their company, “Trademark My Stuff.” They are a Black-owned business and do great work!

9.) In addition to being a podcaster, you’re also a writer and you’ve interviewed some pretty big names in the music industry. Do tell, Marquis.

Writing is my first love and because I love music equally as much, I’ve been able to combine the two and interview some of my favorite artists. Jimmy Jam and Terry Lewis are probably the biggest names I’ve interviewed, but Jellybean Johnson, who is the lead drummer for The Time was probably my favorite. His contributions to the Minneapolis Sound are unappreciated and he has a wealth of knowledge. Gary Hines, the music director for Sounds of Blackness is another favorite because he goes out of his way to affirm my skills as an interviewer and also a writer. I love diving deep with an artist and examining their art through stories.

10.) Speaking of music, at the end of every podcast you ask your guests to name a song that they feel represents Detroit. So now it’s my turn to ask you what song you feel represents “The D.”

As I am a longtime lover of music, many songs come to mind when I think of ones that represent Detroit. But as I am trusting my gut with this response, the song that comes to mind is “Gettin’ It” by Too $hort. When I think about Detroit and the global reach and impact Detroiters have made, I think about our tenacity, strength, and hustle and how it’s allowed us to thrive in areas across the world. I also think about the Jay-Z lyric, “Put me anywhere on God’s green Earth/and I’ll triple my worth/” and how that can be applied to Detroiters who have moved to different spaces and thrived. My time in Minnesota is an example of this as well others I’ve interviewed on the podcast. So, to put it simply, Detroiters are out here “Gettin’ It” at all costs!

11.) Where can people listen to your podcast?

Detroit Worldwide is available on all streaming platforms and wherever you listen to podcasts such as Apple, Spotify, Pandora, and iHeartRadio. Episodes are available on our official website: detroitworldwide.com