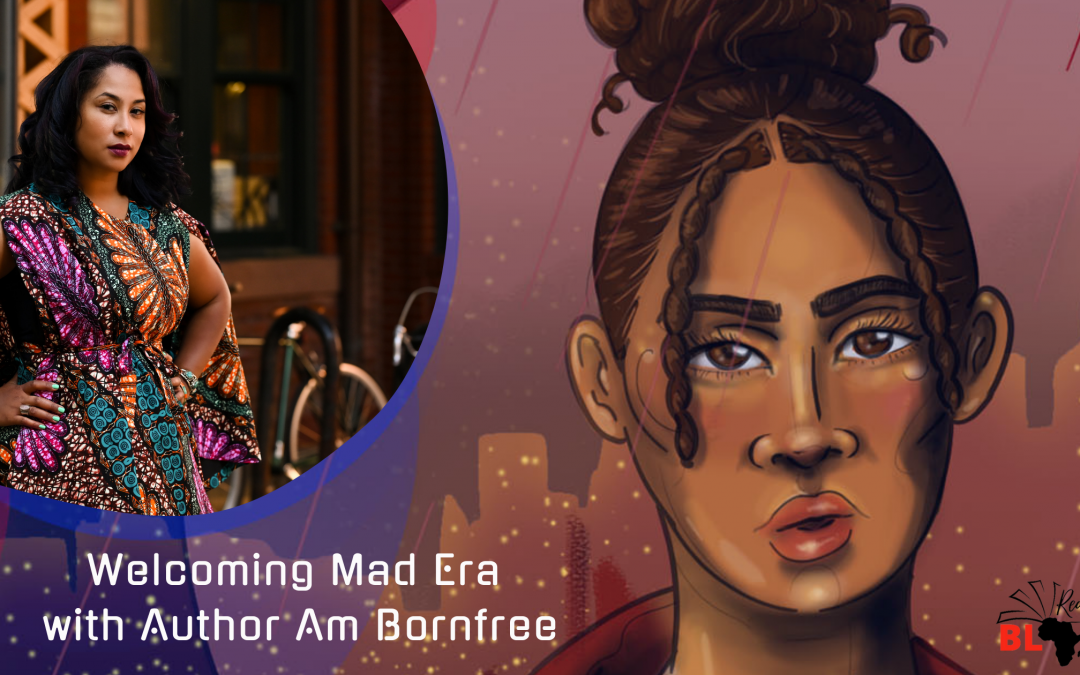 Am Bornfree is a proud native of the Midwest – from Flint, Michigan to Chicago, IL. She lives with her husband and two creative spirited daughters. A self-proclaimed Astronerd, Am Bornfree has been a student of astrology for years. A lover of the arts, Am enjoys making one-of-a-kind holiday wreaths as well as playing with paint. She is currently working on Book 2 of the Revolt Occult Series which centers the character, Adora.

I’m a native of Flint, MI. That’s where I spent my childhood before moving to Chicago as a teenager. I’m a mother of two vivacious girls who keep me busy like a bee. In my spare time, I enjoy reading birth charts and crafting and I’ve been a student of astrology for years. I’m all about supporting my Black and Brown people, especially us in the working-class community. We are literally the most creative out there, because we’ve had no choice but to figure out ways to maintain our laughter, health, etc. outside of strength and resilience, it takes creativity.

2.)Tell us what your book, Welcoming Mad Era, is all about.

Welcoming Mad Era is the first book in my Revolt Occult series. The series centers a coven of diverse characters who use their magic to rectify modern injustices. Each member of the coven resonates with the energy of a particular planet. Welcoming Mad Era (WME) focuses on the character, Madera, who is seeking vengeance for her mother’s murder. This book mimics the energy of the planet Mars – aggression/passion/vengeance.

What happens when the answer to punishing the crimes of a corrupt, unjust system lies in the realm of magic?

When Madera was only ten, her mother was gunned down by a cop in the streets of Chicago. A decade later, living with her edgy, alcoholic aunt, Madera seeks details about her mother’s murder as she learns that she possesses a powerful and deeply personal weapon she must learn to harness before it destroys her. Deterred by her aunt’s bewildering choices that feel like betrayal, an unraveling Madera finds guidance from her best friend, Dewy, and his family. While struggling to control her magic, Madera uncovers a mysterious group that supports her desire to avenge her mother’s murder. Will her vengeance grow out of control, or will it bring justice, is there even a difference?

3.) What was the inspiration for this book?

Back in 2015, I remember lying in bed, pregnant and sick, listening to a psychologist on MSNBC talk about the psychological impacts of police brutality. I recall my stomach churning, and getting really hot like I had a fever. This was following Sandra Bland’s story. Being pregnant with my youngest daughter brought about the mother/daughter dynamics that’s within Welcoming Mad Era. I also desired to shine a light on the police brutality that happens to women, too.

4.) Welcoming Mad Era is the first book in your series, The Revolt Occult. Please share with us some things we can expect in the coming books.

The series centers a coven of diverse characters who use their magic to rectify modern injustices. Each member of the coven resonates with the energy of a particular planet. The second book will center, Adora, who you’ll meet in WME. Adora resonates with the planet, Venus. Venus not only governs love, art, beauty – but also our values. This book will take a look at how love can combat/heal the damage that some hateful primary teachers leave in the minds of our youngest children. It will also take a look at what exactly is “generational wealth” – what should we really be passing down to our children? What are we valuing? Unlike Madera’s story, Adora’s story will flow/encompass the energy of Venus, but it is still about rectifying injustices.

As of now, The Revolt Occult will have a total of seven books which correlate with Mars, Venus, Mercury, Jupiter, Saturn and the two luminaries, Sun & Moon.

5.) What is the most challenging obstacle you faced writing Welcoming Mad Era?

Making sure that the book isn’t another case of “Black trauma”. There is so much more in WME. It is a story about vengeance! I believe Madera’s love and passion for her mother is impactful. Balancing my two cultures, African American and Chicana (Mexican) within this context was actually “freeing”, like exposing the anti-blackness within the Latinx community. I’m not a fan of censoring, and so I refused to hold back on certain topics etc.

6.) Who is your favorite character in your debut novel?

I’m stuck between two: Diane, who is a staple in the West side community of Chicago and keeps her basement as an “oasis” for her community, and Sofia because her wisdom is thick and her demeanor is unapologetic.

7.) What was one thing you learned about yourself while writing this book?

How my fictional characters are all parts of me. For example, Madera’s Aunt Amaryllis and her alcoholic bantering ways and hunger for wanting to be spiritual but not actually “doing it” is quite reflective of me before I became sober three years ago. Yet, everything else about her isn’t like me at all.

8.) Describe your book in one line.

How wild is it – that a daughter’s pain can be made magic to exterminate what’s evil.

9.) Why did you choose to self-publish your book?

To be honest, my patience is low and the last thing I want to do is write queries and wait. Like, I’m not getting any younger and there are soooo many indies out there that are doing their thang. So, I’m like, “why not? Let’s try this!”

10.) Where can readers buy your book?

As of now Amazon, Applebooks, Nook and Kobo.

11.) Where can our readers find you on social media?

My IG is authorambornfree. I’m on Twitter and Tiktok under ambornfree. I really need to start using my Twitter.