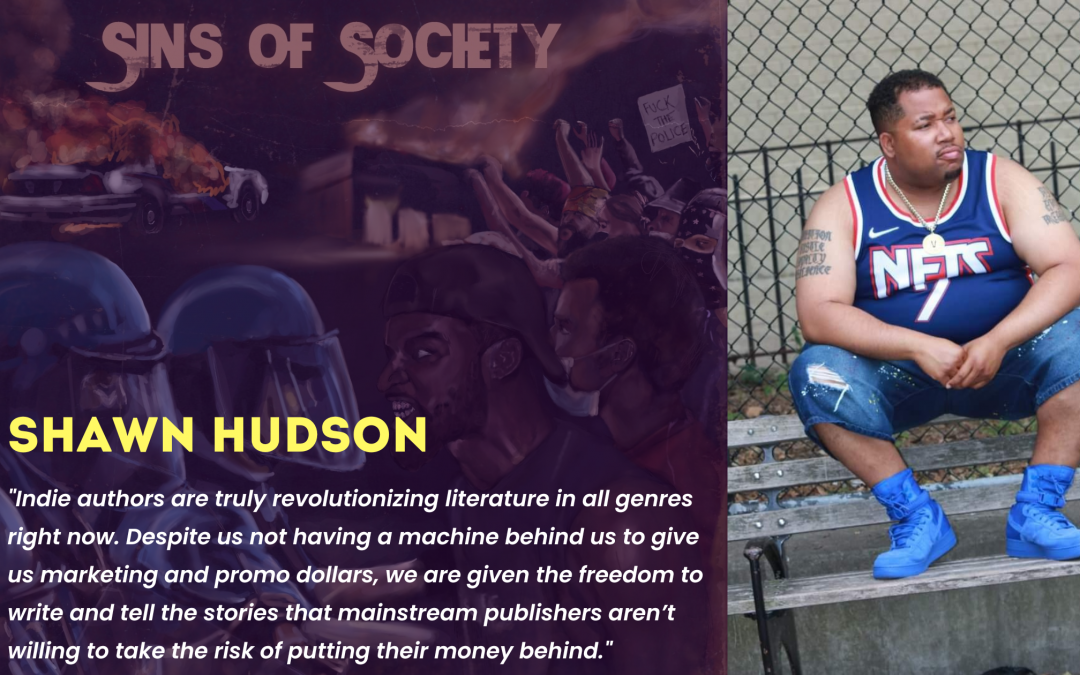 Bronx native Shawn Hudson has been writing since he was 16 and started self-publishing when he was 19. Shawn is the 2022 winner of the Bronx Recognizes Its Own award from the Bronx Art Council (fiction category) for his newest book, Sins of Society.

1.) Tell us a little bit about yourself.

My name is Shawn Hudson, I was born, raised, and live in the Bronx. I fell in love with writing after learning how to read thanks to my mom. I’ve been writing since I was 16 and started self-publishing when I was 19 years old. My first book was “By Any Means” which my high school Eagle Academy for Young Men refused to implement in their curriculum. I’m also the 2022 winner of the “Bronx Recognizes Its Own” award from the Bronx Art’s Council for the fiction category for my newest book “Sins of Society”.

2.) Tell us what Sins of Society is about.

Sins of Society picks up where Just Us left off where both Kat and Fred are coping with the death of Juanita who they both loved while still moving forward with their lives. Not only do they have to deal with their father who is still trying to kill them, but now they have a new Mayor who is also trying to push this billion-dollar jail plan in Sinville. Kat and Fred have to combat both issues with all of the turmoil in the streets of Sinville.

3.) Where did the idea for this book come from?

After putting out Just Us in 2019, and after I recovered from Covid-19 back in 2020, I started to gather my thoughts. I knew I had to continue where the story left off but I had to raise the stakes otherwise the story would get stale. I read articles on how to write a great sequel and I learned that I had to create a new story within a story. I wanted to talk about prison abolition since I’m a prison abolitionist and a grassroots organizer I wanted to talk about this since no other urban fiction story talks about these issues.

4.) What was the hardest thing about writing this book?

The hardest thing about writing this book was writing the scene where the protestors were attacked by the police. It’s based on a real protest that took place on June 4, 2020, in the Bronx and it was called “FTP 4”. I literally watched the human rights footage of the whole protest and made it as accurate as possible. I wanted to highlight how Black and brown people from the hood are seen as disposable by the cops, which is why they felt comfortable doing that to these protestors on that day.

5.) What was one thing you learned about yourself while writing this book?

The one thing I learned while writing this book is that I’ve grown into a more mature person. Growing up, I was homophobic and transphobic, as were a lot of people that grew up in the time that I did. As I got older and started to be around more people in the LGBTQ community whether it was friends, classmates, or comrades, I realized how wrong my views were. I knew when I started the Sinville series that it was a chance to reinvent myself as a writer and grow as a person overall.

6.) What is your favorite scene in Sins of Society?

It’s hard to choose a favorite scene from Sins of Society because I loved writing this book. But if I had to choose then it would be the scene where the Street Disciple Gangsters and the South Side Kings made their truce. This was my favorite scene because it was based on the Hoe Avenue Peace Treaty which happened on December 8, 1971, in the Bronx. I wanted to illustrate that street families and gangs can be powerful and also protect the community, which was their original purpose to begin with.

7.) Describe your novel in one line.
Sins of Society is a story about two siblings fighting not only for revenge but for the livelihood of their community.

8.) Why did you choose to self-publish your work?
I chose to self-publish because I knew that I didn’t want some corporate clowns at a major publishing company to have creative control over my work. The year before I self-published my first book, I started my freshman year at Monroe College studying Business. I ended up graduating with both Associate and Bachelor’s degrees. I made sure that I learned about copyrights, trademarking, and royalties. After reading about how Holloway House publishing robbed many black writers like Donald Goines and Iceberg Slim, I knew that if I ever signed a traditional publishing deal it’s gotta be the right deal for me.

9.) Define what being an Indie author means to you.
Being an indie author to me is taking control of your own destiny. When things go well you get all the fame and when things go wrong you get all the blame. Whether you’re publishing your books through Kindle Direct Publishing or another self-publishing outlet you have all the creative control and reap the benefits. Indie authors are truly revolutionizing literature in all genres right now. Despite us not having a machine behind us to give us marketing and promo dollars we are given the freedom to write and tell the stories that mainstream publishers aren’t willing to take the risk of putting their money behind. A story like Sins of Society would’ve probably been watered down or shelved if it was to come out from a major publisher, which is why I’m staying independent unless the right offer is made to me which is majority royalties and creative control.

10.) Where can readers buy your book?
Readers can purchase my book on Amazon and Audible in paperback, eBook, and audiobook formats.