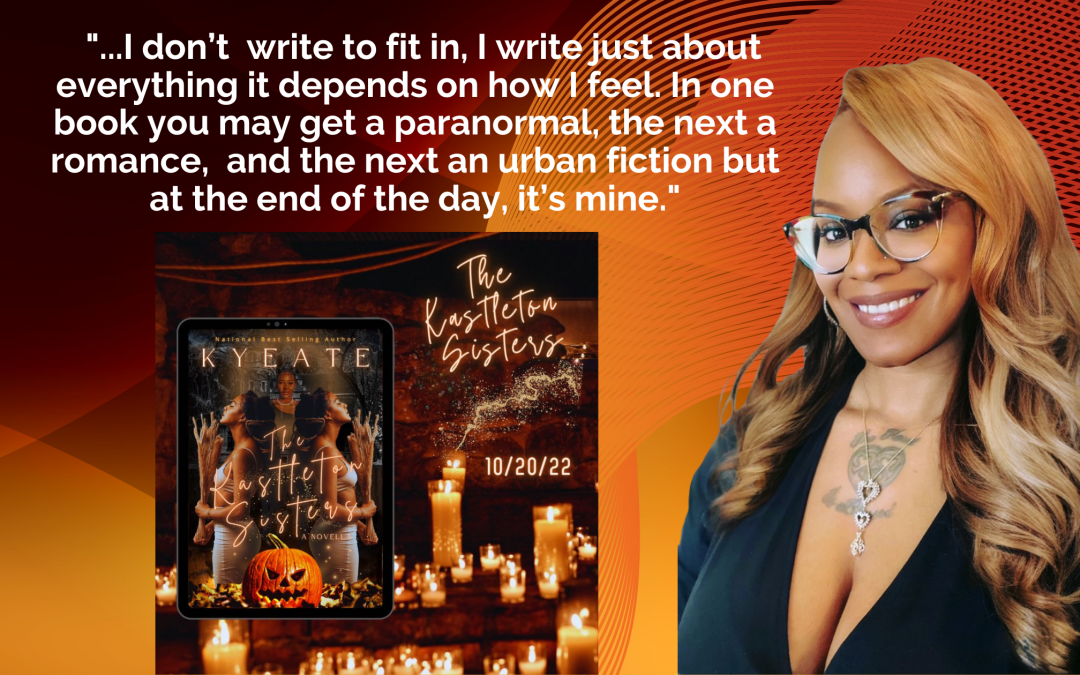 Best-selling author Kyeate stepped into the literary world in 2018 with her debut release, A Savage and His Lady. Since then, she has published over 35 titles comprising urban lit, romance, erotica, and paranormal. Tricked: A Halloween Love Story was the first book that earned her a best-selling title. We know Kyeate for her twist on paranormals with a ghostly flair. She has penned more bestsellers, including the series 120 Hours and her personal story I Give You…Me Unapologetically Me.

My name is Kyeate (Ky-eat-tah) I’m a thirty-seven-year-old mother of three that loves to escape to soothing worlds whether it’s reading or writing. I’m very introverted but social if that makes sense. I’ve been writing for about six years with a total of over 35+ titles. I started out as an indie author not knowing anything about the writing industry until I signed with my first publishing company, Mz. Lady P Presents. There I was taught the ins and outs of the industry and got the feel of being with a publishing family. I went back to being an indie author after she dismantled her company, and I took the tools I learned to further my indie career. I was looking to rebrand and get into another publishing family because at one point being indie made me lazy. I felt I needed pressure applied so I signed with K. Renee publications for a short while. Life ended up happening to the point where I wasn’t sure I would write again so I went back indie. I’ve been indie ever since and have been pushing myself to be that author that leaves a lasting impression in this writing world.

2.) Tell us what The Kastleton Sisters is about.

The Kastleton Sisters is about three African American sisters that are witches. Selene and Isis are twins and they have a younger sister, Mona. They reside in a fictional town I created called Crestin Falls. On All Hallows Eve, tragedy strikes causing the Kastleton Sisters to adjust to new beginnings in an unfamiliar ghostly realm. As they search for answers and help, the sisters reach out to an unlikely source, their estranged Aunt Velmorcia.  Although Velmorcia agrees to help to the best of her abilities, Selene isn’t fully convinced all help is good help. Truths are revealed and everything is starting to come full circle for the Kastleton Sisters as they fight the darkness before it’s too late.

3.) What inspired you to write this book?

I wanted to do something different this year than my usual ghostly spin. Something where I could create my own rules. I love my ghost stories which will still be a part of this book but the creativity and the thought process I was able to do for witches were even more fun.

4.) Which of the sisters is your favorite and why?

My favorite sister would have to be Isis Kastleton. Isis is the twin that is free-spirited and takes no mess from anyone. She kept me laughing while creating her because sometimes she could never be serious in serious moments and that’s me sometimes. I may come off as a quiet person but I’m a jokester if you know me.

5.) When did you know you wanted to be a writer?

The way I came into writing I never took it seriously or even thought that I could create things that got me to this point. When I was younger being the only child in my mom’s house, I always loved to read. I would get a journal and draw characters and create these stories that I know if my mom would’ve read, I would get in trouble LOL. It wasn’t until the death of my oldest daughter’s father in 2008 that I actually opened a laptop and began to create a story. That was how I grieved. I printed the book out and I let one person in my apartment building read it. Then it circulated around the entire complex with people reading and wanting more. Even then, I didn’t take it seriously. I entered a short story challenge on Facebook and the feedback I got was so amazing and then I was like I could do this; people really like my thought process. I knew then that I needed to go for it.

6.) Why do you think it’s important for Black authors to write in the horror genre?

As a Black author, I feel it’s important for us to be able to write in anything we want. Why can’t we, is the question? We are just as great as our minds allow us to be. I think it’s dope that we can create these worlds that we own, and some may create from fears we have. I used to be scared of ghosts as a kid but now it’s something that I embrace for personal reasons, so it makes me excited to be able to tap into that world where I’m free and nothing exists except what I create.

7.) Why did you choose to go the route of self-publishing?

I chose self-publishing coming into this industry because I had no clue who to trust at first. I have nothing against publishing companies and have seen my share of horror stories while in the industry. Now the two companies I was with, Mz. Lady P and K. Renee were awesome. I learned a lot being with such great ladies and I loved that I still had that control over what I wanted to write. Being indie has its pros and cons but it’s something that I will choose every time. I’m not a full-time author meaning I still must clock in and go to work so my being indie helps the pace at which I want to release something and there’s no pressure on having something done. I just love being free and having control of what’s mine.

8.) What do you feel is the connection between self-publishing and preserving the authenticity and voice of the stories you tell?

The connection is it’s my words and mine only. It hasn’t been twisted, poked, or remixed to fit the masses. Being self-published you get the original feel that I want to give and not what someone thinks will sell for that moment. That’s very important to me because I don’t write to fit in, I write just about everything it depends on how I feel. In one book you may get a paranormal, the next a romance, and the next an urban fiction but at the end of the day, it’s mine.

9.) When will The Kastleton Sisters be released?

The Kastleton Sisters will release on October 20, 2022

All my books are available on Kindle on Amazon.