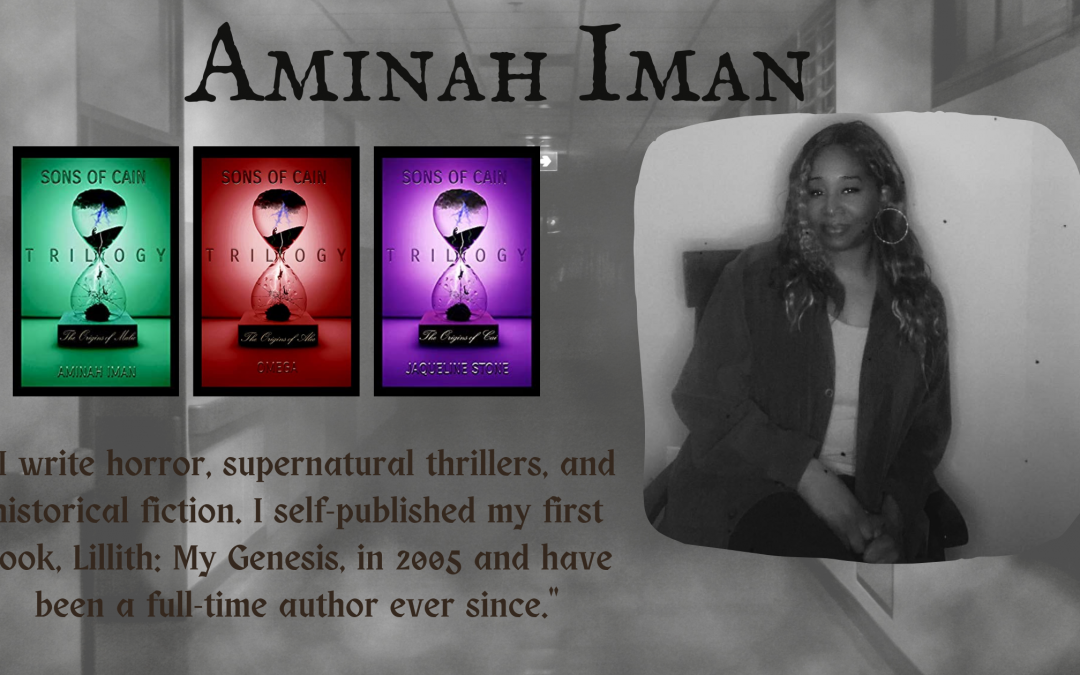 Aminah Iman left her job to write in 2005 and is the author of 18 books, all published under Red Ink Publications, of which she is CEO. She clearly loves what she does and has a big heart for helping other authors find success. She took newcomers Jaqueline Stone, Nefertiti and Omega in to rally the all-women-of-color publication house. She started writing at a young age and believes, whether read, spoken, or written, words are the essence of power. Aminah loves reading as much as she loves writing and spends a great deal of her free time immersed in the pages of a book. Her genres range from Historical Fiction, Horror and Supernatural which she has read and written for over 15 years. “I learned that I have a dark side. Not an evil side, but a side that can definitely go dark.”

Writers have vivid imaginations, but some will allow their stories to remain trapped inside of them because they are afraid to let their creativity soar.

Not Aminah. She lets her mind go down the rabbit hole and the results are amazing.

Let’s get right to it.

1)Tell us a little about yourself.

My name is Aminah Iman, and I am the CEO of Red Ink Publications. I write horror, supernatural thrillers, and historical fiction. I self-published my first book, Lillith: My Genesis, in 2005 and have been a full-time author ever since.

2.)Tell us what Origins of Malic all is about.

The Origins of Malic is about the eldest son of Cain and it tells of his life from the time of his birth until present day. Malic was born with the immortality of his father and the affinity to control the earth from his mother. Cain has used him and his brothers to cause destruction throughout history and now has plans for them to help him break into the seven levels of heaven.

3.) What was the inspiration for this book?

The inspiration for writing this trilogy came from writing Lillith. In Lillith when she was kicked out of the garden she was banished to the wilderness. Once Adam and Eve were banished and had children, Lillith set her sights on an adult Cain. After Lillith and Cain’s affair ended Cain went his own way. I was compelled to write what happened to Cain and the family he created after he was marked, and the brothers grew from there.

4.) What was the hardest thing about writing this book?

The hardest thing about writing this book was making sure all three books in the trilogy were chronologically accurate. We had the brothers meet up at different times in history so there was a lot of research and fact-checking.

5.) What was one thing you learned about yourself while writing this book?

I learned that I have a dark side. Not an evil side, but a side that can definitely go dark.

6.) What is your favorite part of Origins of Malic?

My favorite part of this book is near the end when all three brothers meet up in Harlem in 1920. I won’t give too much away, but 2 of the brothers had to restrain the other and all of their powers and affinities were displayed. It was very descriptive and showed their strengths and weaknesses.

7.) Describe your novel in one line.

He is an immortal with the affinity to control the earth and is afraid of no one, except his father, Cain.

8.) This book is part of a trilogy called The Sons of Cain. Please tell us more.

The Sons of Cain branches off from the first family tree of Adam and Eve. It picks up where the bible leaves off once Cain was banished. All three books tell of each son’s relationship with their father and their journey throughout history and their final mission which is to break into the seven levels of heaven.

9.) Why did you choose to self-publish your novel?

When I first started writing in 2005 I could not get an agent so, I went the self-publishing route and haven’t looked back since.

Readers can buy my books on Amazon, Barnes and Noble, Apple Books, and wherever ebooks are sold.

11.) Where can our readers find you on social media?

Unfortunately, our website is under construction. We are revamping the entire thing, but I will definitely let everyone know when it’s up.